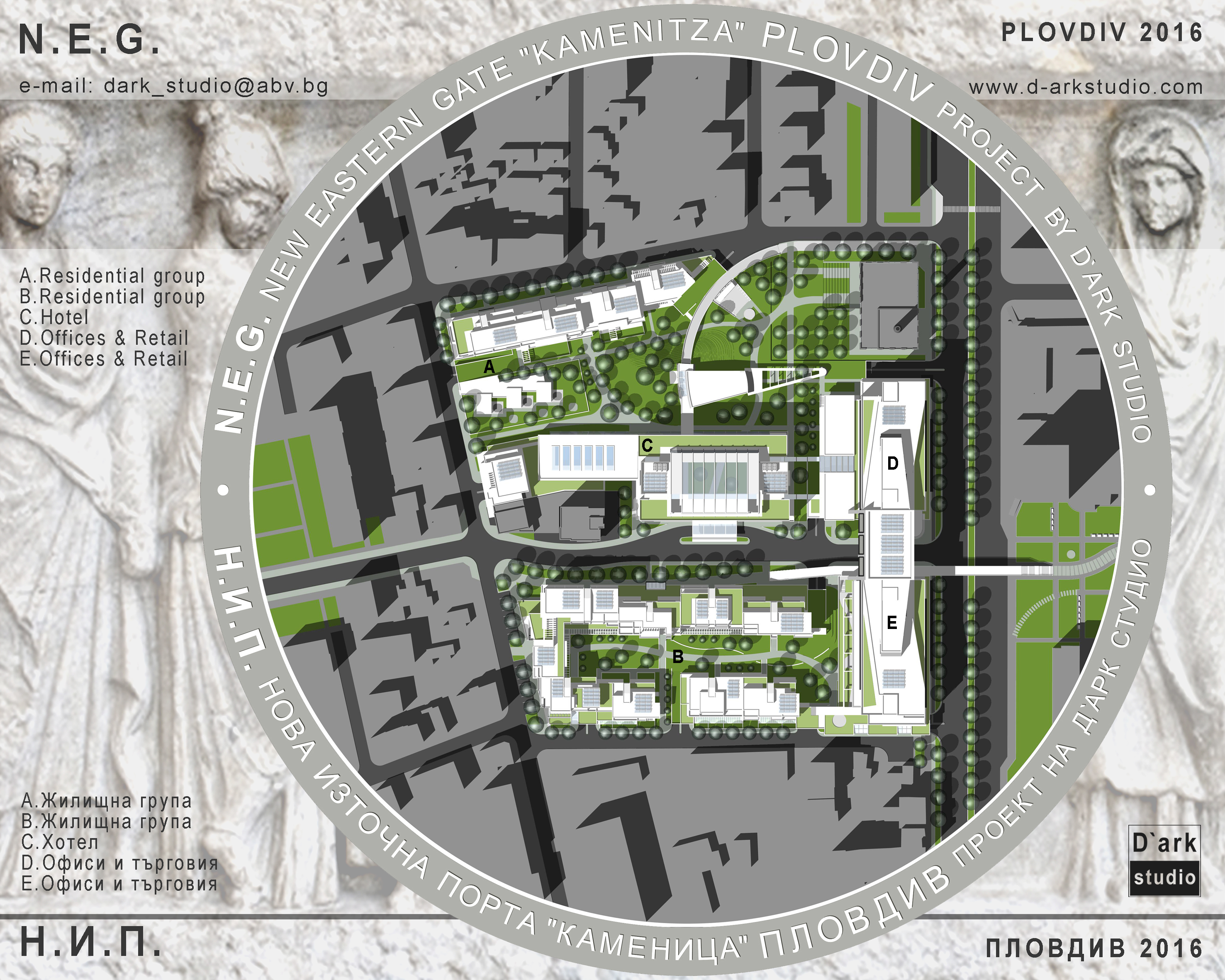 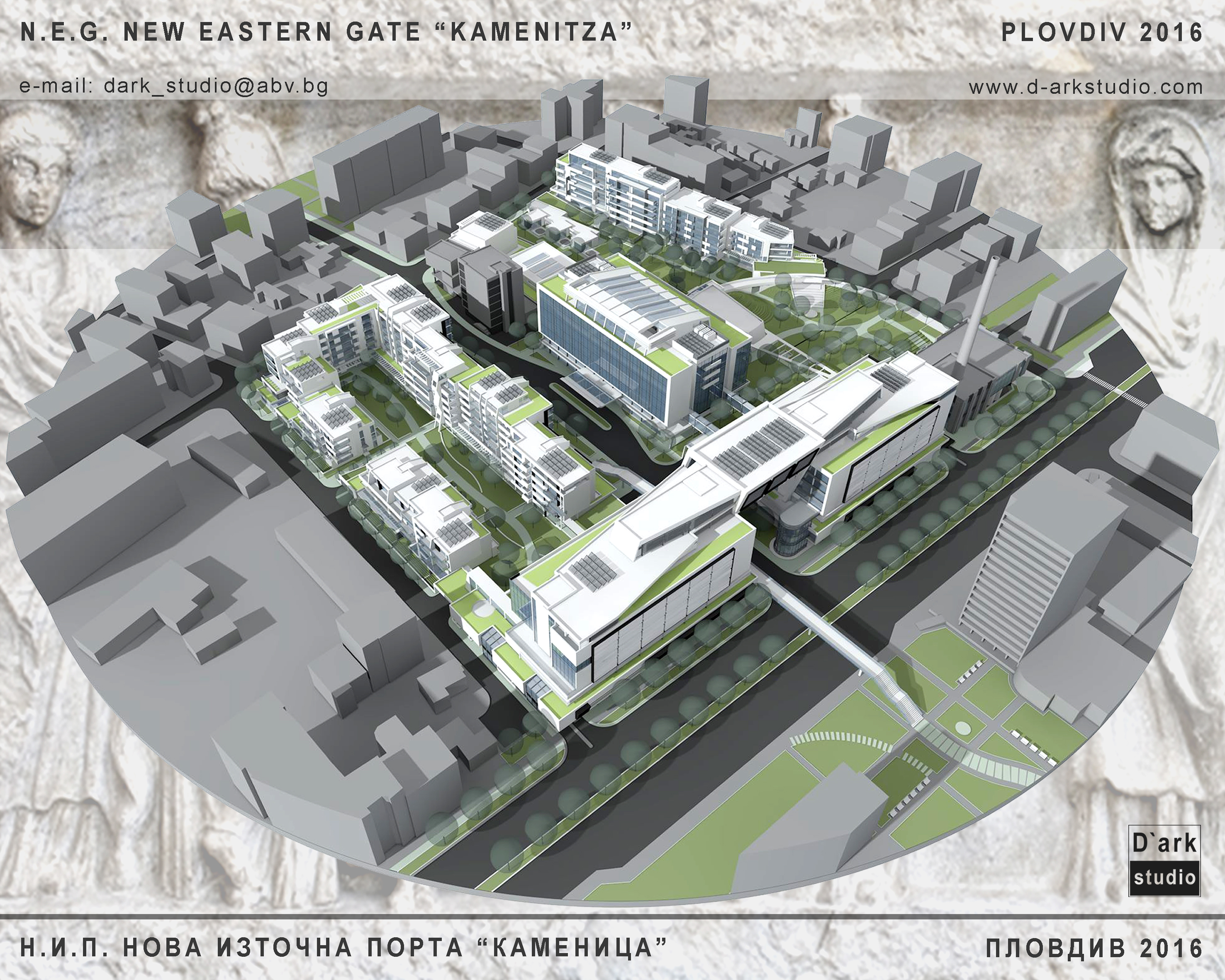 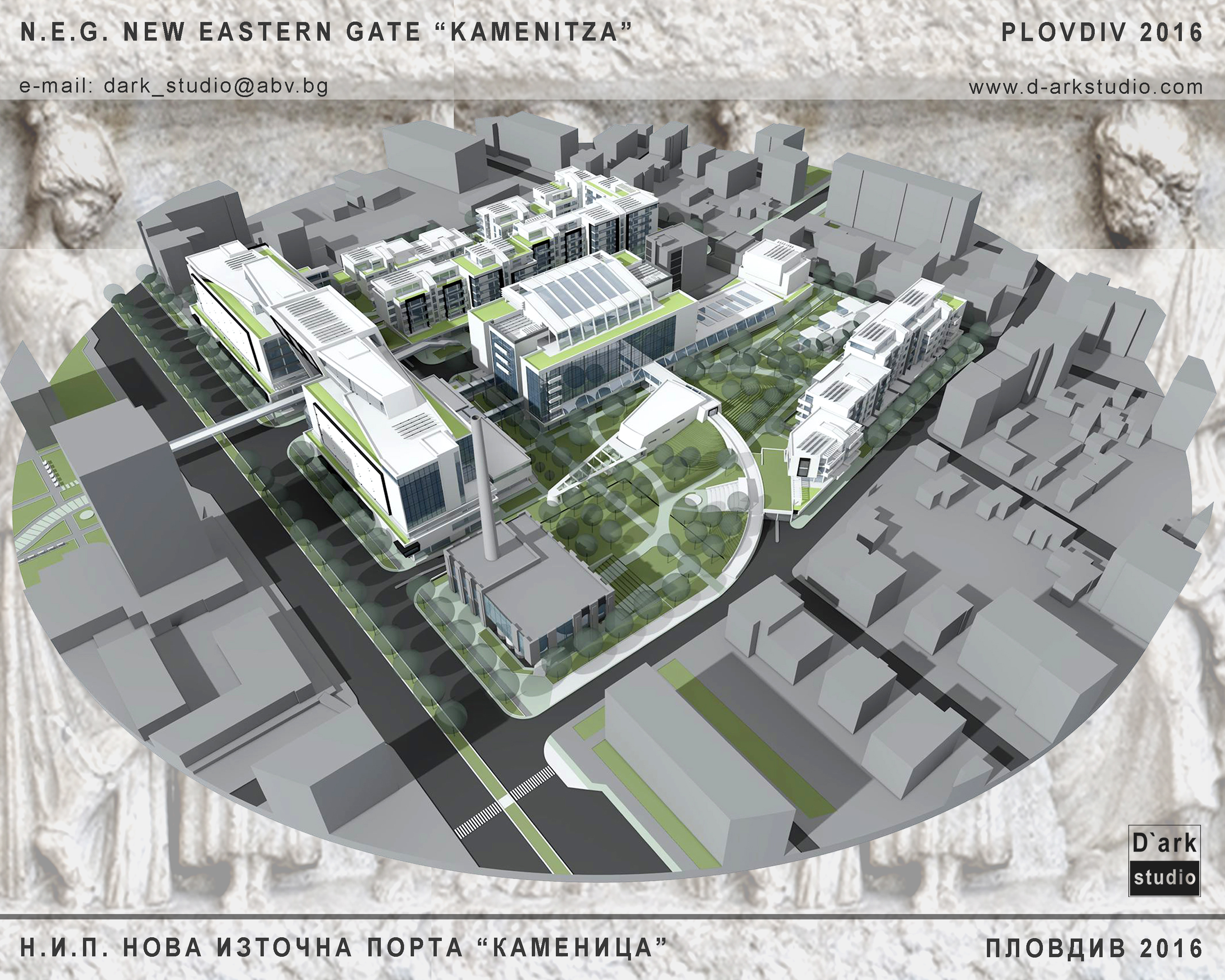 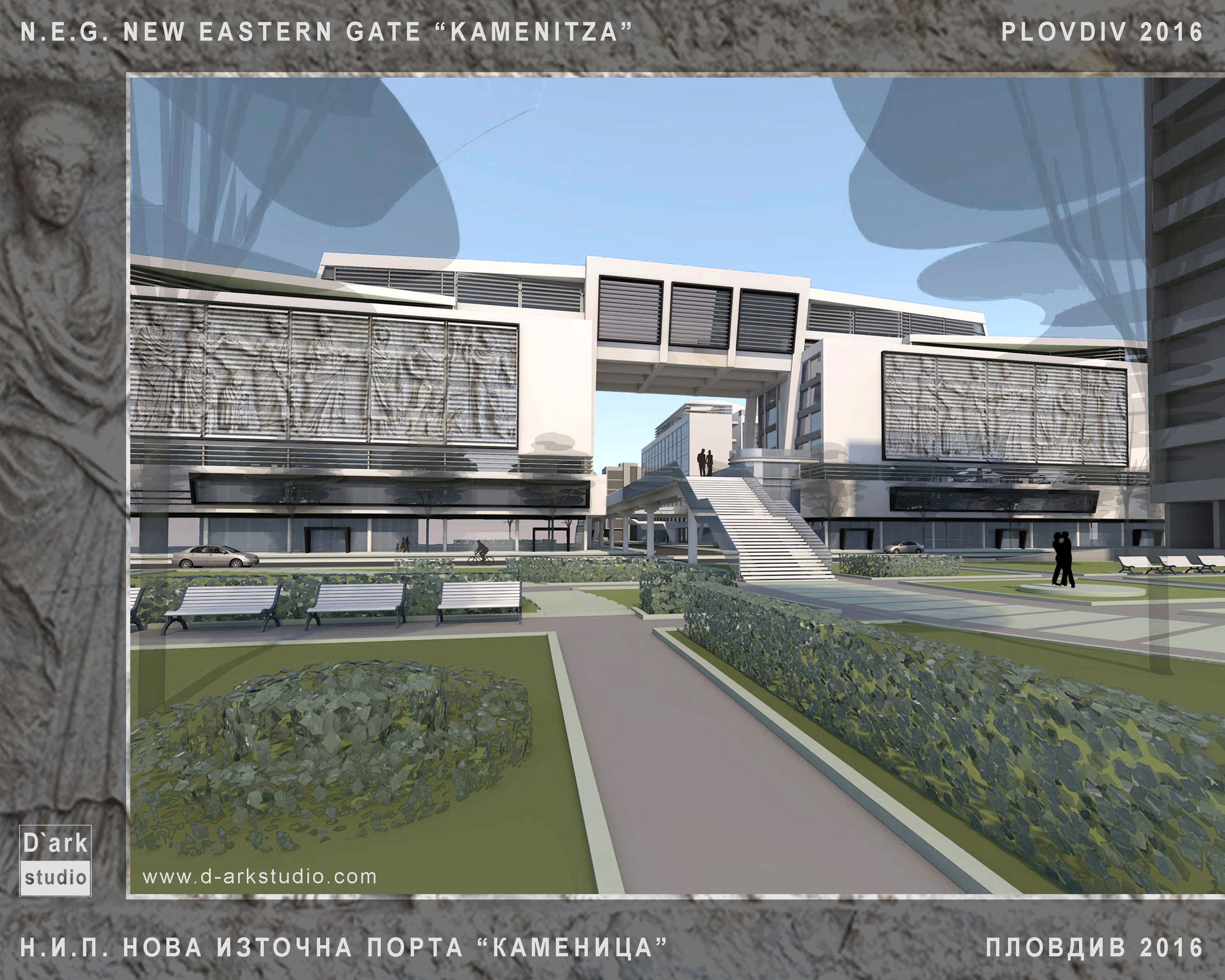 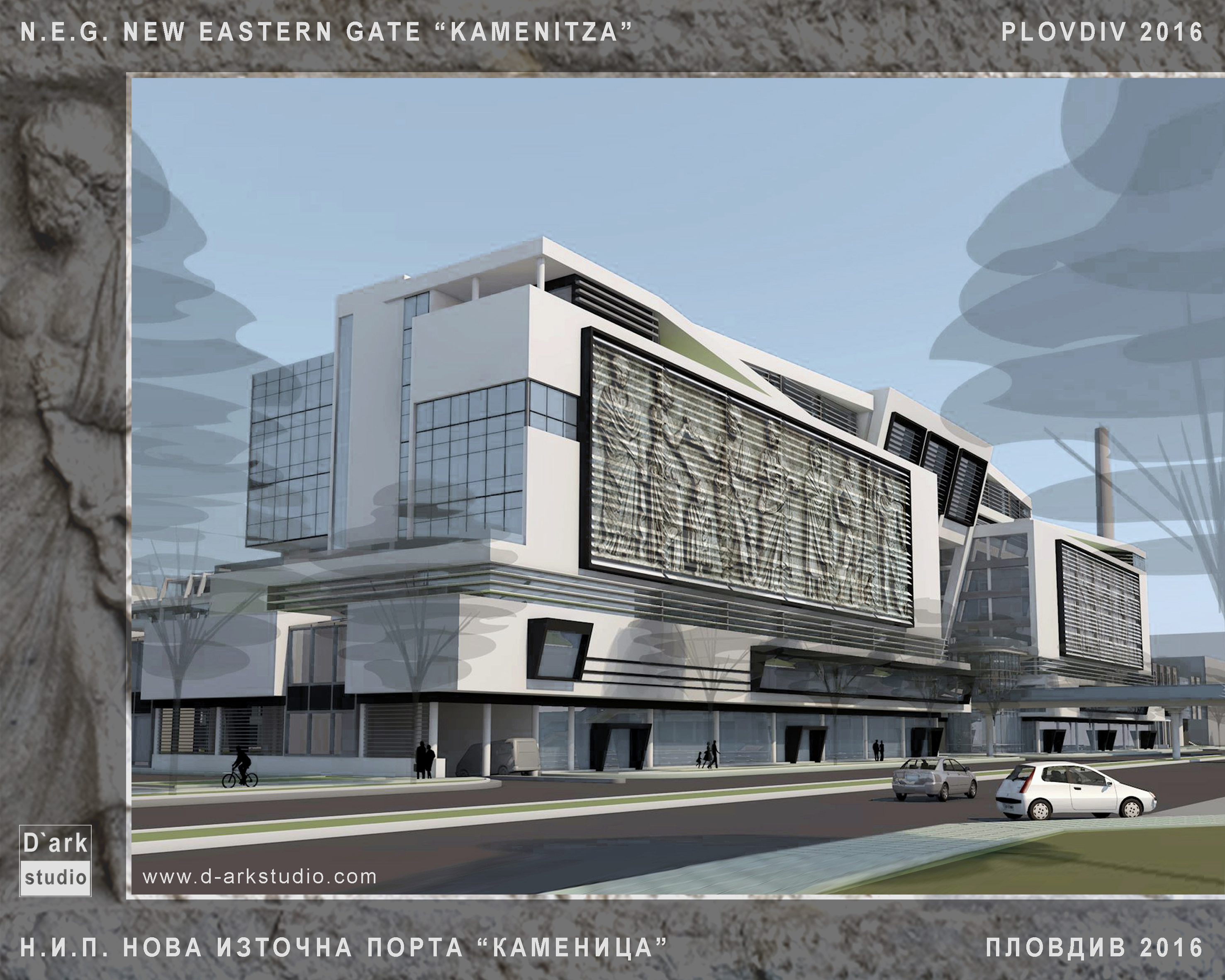 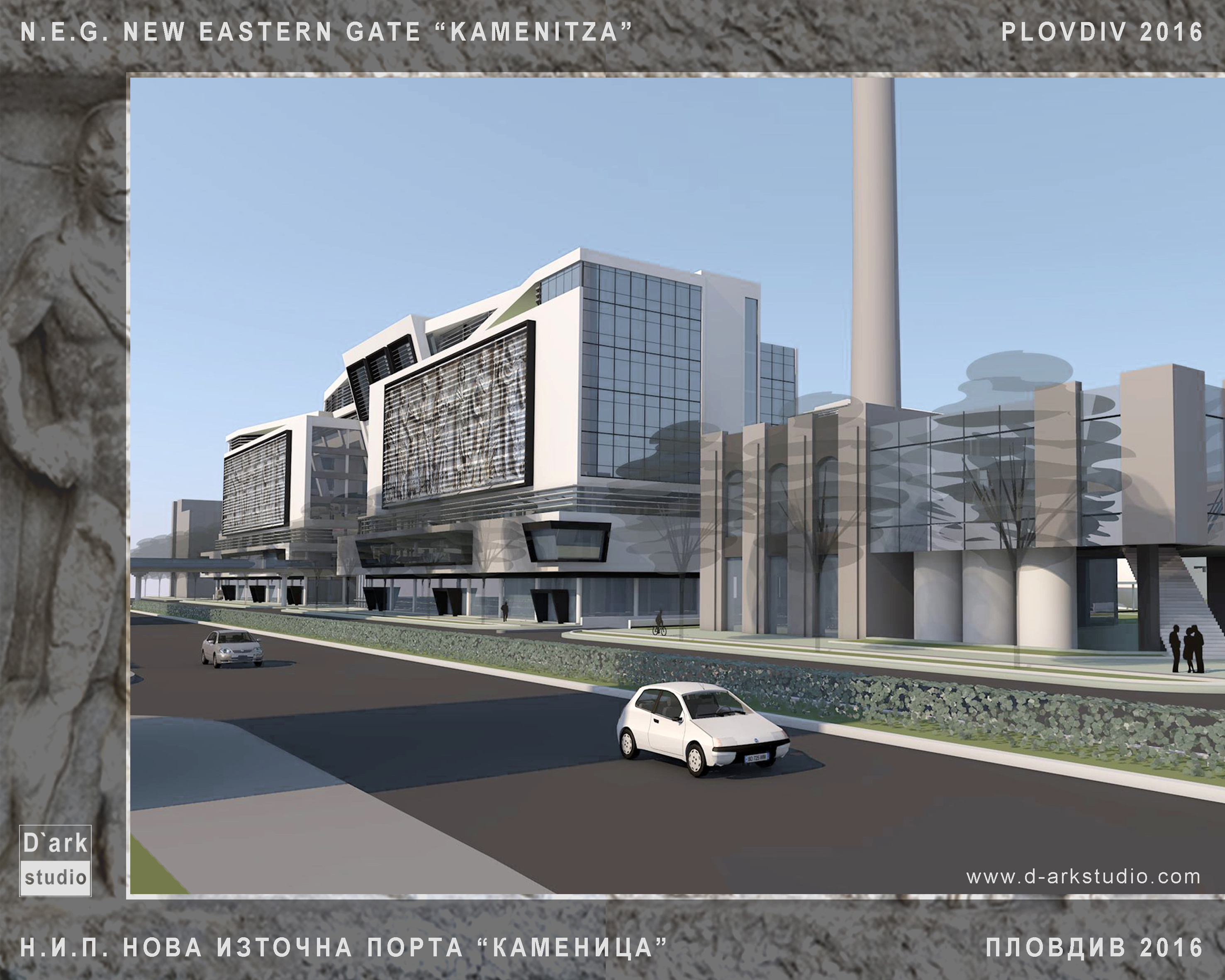 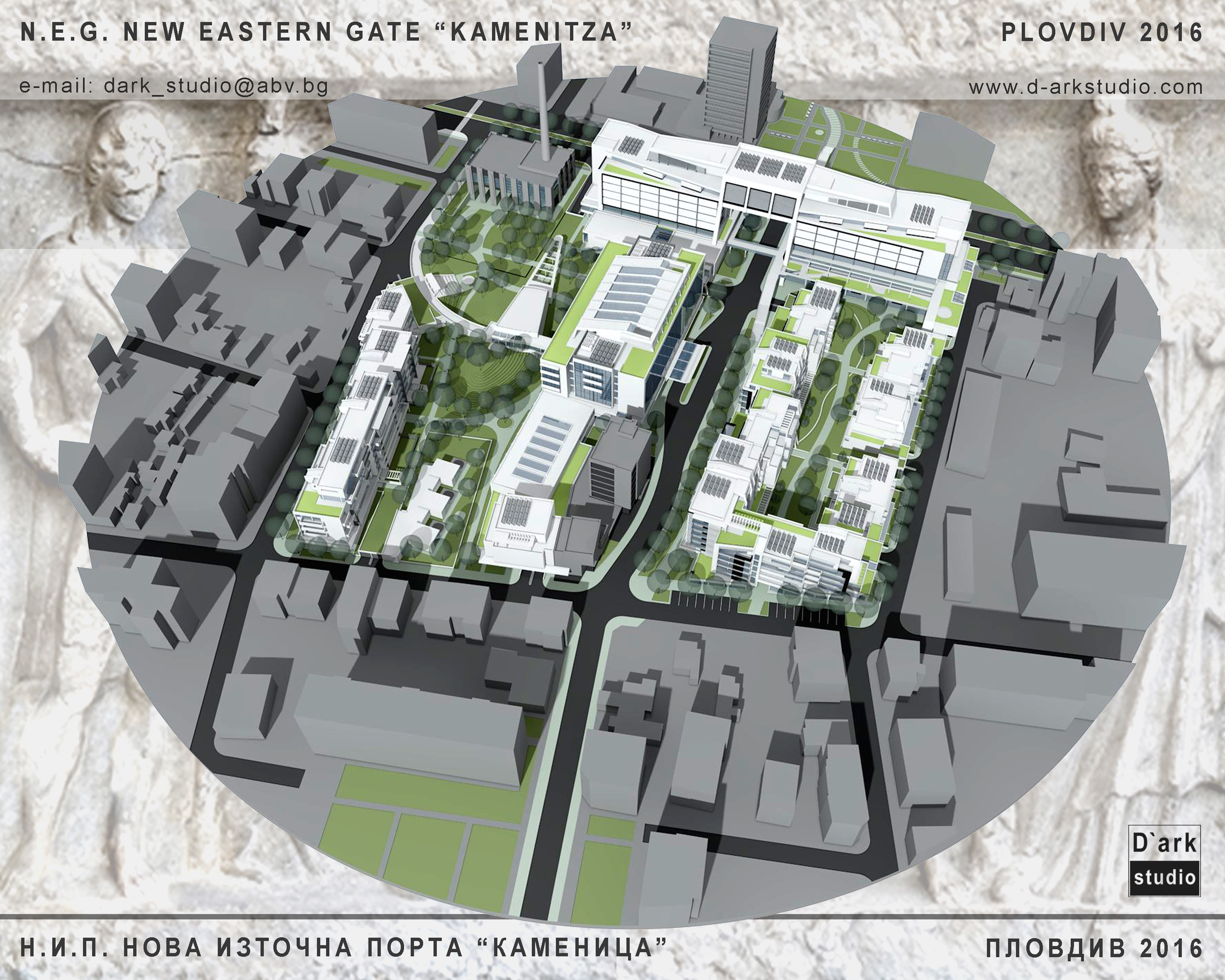 
We introduce our project of a multifunctional complex of buildings and park areas located on the terrain of the former brewery ‘Kamenitza’ in Plovdiv.
The site is located on the ‘Iztochen’ Boul. and in the eastern part of the central area of ​​the city. Our main idea is for complex to become a "new eastern gate" to the actual historical, cultural and business center of Plovdiv.
The leading functions are office, commercial, housing and a hotel located into the park area. N.Е.G. has the potential to become a very strong secondary urban core.
There is an undeniable urban logic for establishing a strong east-west axis in structuring this territory. ‘Kapitan Raycho’ Str. should be opened and connected to the ‘Iztochen’ Boul. through the developed terrain. Pedestrian bridge crosses above the boulevard and connects N.I.P. to the existing park to the east. This pedestrian link will be very important not only for the new complex, but to the city as a whole. This will take the pedestrian traffic from the ‘Iztochen’ district along the ‘Kapitan Raycho’ Str. to the ‘Central square’ of Plovdiv, it may become a pedestrian axis in the urban structure with the potential to close in importance to the main north-south axis of the ‘Main central street’.
Around the main east-west axis five basic elements of architectural design are composed. ‘New Eastern Gate’ is a commercial and office building (D, E), which is almost a symmetric longitudinal structure parallel to the ‘Iztochen’ Boul. in two buildings connected over the transport and pedestrian breakthrough of ‘Kapitan Raycho’ Str. towards and above the boulevard. This arch-shaped building materializes the idea of ​​the new eastern gate.
In the middle of the complex is situated the hotel (C) with a maximum capacity of 400 beds. It is designed as an atrium building containing hotel rooms and suites, lobby, restaurants, bar and additional buildings for the conference block, spa and indoor pool and other functional units that are required for a 4 or 5 star-hotel
In the northern and southern part of the terrain two apartment residential groups (A, B) with a maximum of 300 apartments are located as well as a commercial zone on the ground levels. The housing is provided with a park area and group A has an additional kindergarten.
In the northeast is the Park zone.  Arch-shaped alley - ramp introduces guests to the second floor of the hotel where the conference hall is located, around which an artificial hill is designed. In addition to the promenade there is an open-air summer stage.
The entire car parking of the complex is underground. Provided with a total of about 1,000 parking spaces allocated to the respective buildings and residential groups.
The property of this urban and conceptual architectural development has an area of ​​31,000 square meters. Our project offers a total built-up area (on the ground level) of 15,000 m2 and total gross floor area of ​​110,000 to 124,000 square meters (including the 77,000 up to 91,000 m2 above ground) which determines the built-up density of about 50% and coefficient of intensity from 2.5 to 3.0. Detailed area characteristics and functional planning of the floors of each building are presented in separate charts.